We got chickens! And because we inherited our girls from my sister's friend, we didn't (re)name them Molly, Duffie and Pepper as planned, but kept their original names, Vanilla, Chocolat and Honeycomb. We didn't want to confuse them, or the girl next door, whose name is Molly.

They are very good looking hens - handsome - and they are sisters, about a year old. We expect them to start laying again when it gets a little warmer, and probably continue laying for another year or two. I don't want to think about the other end of the life cycle, and while Sam is opposed at this stage to keeping chickens that don't lay eggs, I'm all for the pet part of the experience for as long as the old girls will hang in there. I'm sure he'll come 'round, despite the fact he is yet to hold one in his arms. (Poppy: "C'mon Dad! Honeycomb is your chicken! You have to hold her!")

It was quite a lengthy process to bring the girls home to their new coop, but we ended up doing it all in one day. As you will have noticed with the one-day no-dig garden process, I like to do things all at once! We have two more garden beds to build next weekend, so we thought we'd timed the introduction of the chickens to the landscape pretty well.

We knew we had to get the girls home from Eumundi by dusk, so they could settle into their new surroundings, which are quite cosy without the extended run we're planning to build around them, but before that, Poppy and I had to find the good feed we'd read about in our Barastoc Chook Book, and add new, dry, sweet hay and pine bark chips to the coop. I'd read about this fancy schmancy Deep Litter Method (DLM) on an American chicken forum, so naturally we had to try it. Everybody I spoke with about it said, "Why don't you just let 'em scratch around in the dirt? THEY'RE CHICKENS." But I wanted my chickens to be cosy after the distress of a move, and I quite liked the sound of not cleaning out the coop every week. In fact, if we did it properly, we might only need to clean out the coop every few months, or once or twice a YEAR. (Sam: "Who'll be cleaning out the coop?")

No doubt looking like the kind of scurrying chooks we were about to acquire, Poppy and I jumped into the car - finally - after two o'clock and took off! We'd been parked in, in our own driveway, after our housewarming party on Saturday night had given a friend a good reason or five not to drive home, and I didn't want to move her car. We'd found other things to do up until two. 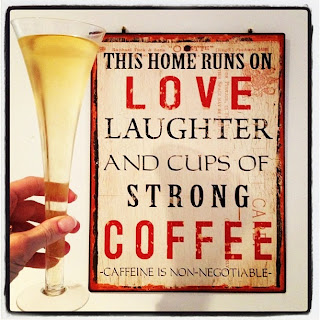 Timing was everything! We raced to Kawana, where the big pet shop is. Poppy remembered it, because it's called Best Friends and her pets are always her best friends. Awww. We found the feed there, but the staff didn't know what I was talking about when I asked about Diatomaceous Earth (DE) and said, "Why don't you let them scratch in the dirt? THEY'RE CHICKENS". I glanced at waterers and auto feeders and the like and decided to leave with the feed. We stopped by another pet store on Wises Road, for shell grit, and then Buderim Garden and Landscape Centre for the pine bark chips (no one at the garden centre knew about DE either. I'll have to get it online), put aside two palettes to pick up during the week (note to self: pick up the two palettes we put aside on the weekend), and took off to Eumundi, which is sooo far away when you're in a hurry.

It was almost 4:30pm and we arrived at my sister's place before she did! So we chatted with Mike and Oscar, and met their chickens - four black Australorp beauties - and then the kids ran across the land, as you do when you're a kid and you discover that you're surrounded by open space, and picked a heap of grapefruit, which Poppy carried back to the house in the folds of her dress. Now we need to make marmalade to use them all! It was getting dark and cold when Ana finally got home. She'd got caught chatting, and then there was the matter of catching the chickens! They were so cosy in their box that we thought it best to get them straight home and into their new quarters before dark. IMPOSSIBLE! I'm always very optimistic about getting somewhere on time, and then I never seem to leave soon enough, so it was no surprise to get home just as night was falling. Of course we - and by we I mean I - had to lug the hay bales and the pine bark chips around the back first, and lay it out in the coop. Poppy's job was to talk to the chickens and make sure they stayed for a while longer in their box. This was a job she was happy to take on right up until the point she decided that she wanted to help lay the hay, and then Sam came home, so we put the bag of shellgrit on the box to keep them safe and warm in there for FIVE MORE MINUTES.

Of course it was dark! And only a glimmer from the nearly-full moon, largely obscured by cloud. And I hadn't picked up a chicken for more than ten years or more, so I was determined to just do it, and move them on in there without a fuss or any stress to either party. These girls were bigger than we'd all expected so they were heavier to pick up than I'd imagined, but one by one, in they went, into the sweet straw-smelling roosting box for the night. Sam was impressed with my chicken-picking-up skill set, but it's thanks to Oscar's expert demo back in Eumundi that I could feel so confident about it. 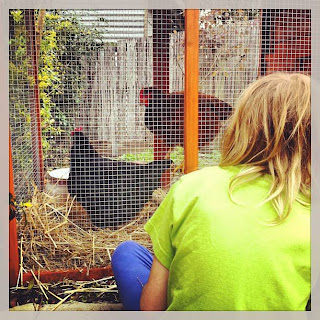 We won't let them out of the coop until tomorrow, Thursday, which means they will have settled for four days before we let them free range and roam about the yard. Supervised visits outside only of course, due to the new vege garden, the pool, the trees and the neighbours. I have to admit I'm a little nervous about their first day out! I'd prefer to have the run built and get them used to the place by degrees but let's just see if they are happy to follow directions and return home to the coop for the night (and not choose to roost in a neighbour's tree!). I know. They're chickens. They'll do whatever they want to. But I've been feeding them treats in the afternoon, which will surely have established a delicious routine they can't resist conforming to. Treats include spaghetti - it's hilarious watching chickens eat spaghetti - and cheese rind, grapes and (popped) popcorn. Of course, if it's super cold I make them porridge in the mornings. 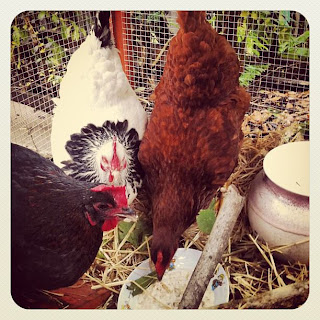 Do you have backyard chickens? What are their favourite treats? Do you spoil them or do you, you know, just let 'em scratch around in the dirt?!

before you judge a woman, walk a mile in her shoes. then, when you judge her, you are a mile away...
and you have her shoes.